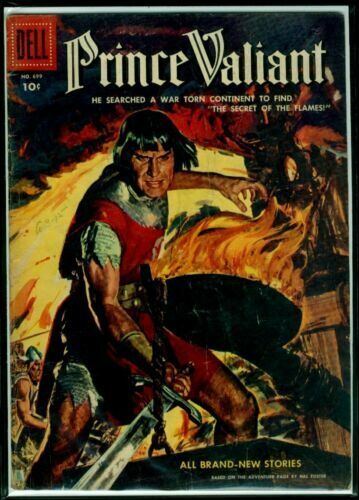 Prince Valiant Silver Age comics (1956-1969) are based on themes of nobility, damsels in distress, steeds, fierce battles between good and evil forces, and adventure fantasy. The Prince Valiant comic strip was created by Hal Foster in 1937 and uses a panorama style as a technique.

What is the backstory of the Prince Valiant comics?

The character Prince Valiant was created by Hal Foster and published by Dell comics. It was originally published as a single comic strip, and then later as half and full-page comic strips. Some newspapers still run the strip today. Classed as "adventure storytelling," the comic strip is set in fifth-century Britain in the time of King Arthur and the Knights of the Round Table.

Prince Valiant, as the story goes, was born in the land of Thule. Once a troubadour singer of ballads, Valiant himself becomes one of King Arthurs knights. The young prince ventures across the known world, which included Europe, the Americas, a crumbling Rome, mysterious Africa, and the Holy Land. He ventures in sword play, defending the oppressed, and righting wrongs.

Prince Val, as he is often called, marries Aleta, queen of the Misty Isles. His children go on to have additional adventures.

What does it mean for comics to be "silver age?"

American comics are classed in a number of "ages" based on their production dates. The Silver Age covers the era spanning from 1956 through to about 1970, and describes the time when these comic books once again came into vogue after the post-World War II drop in interest. The term itself can be traced to a comic volume published in the year 1965, which printed a fan letter that read, in part, "If you guys keep bringing back the heroes from the Golden Age, people 20 years from now will be calling this decade the Silver Sixties!" The terminology stuck, and is still used today. Other "ages" include the Golden, Bronze, and Modern Ages.

How does Prince Valiant fit in with silver age comics?

Several comic books feature a superhero. They are a human, or sometimes an otherworldly being who possesses superhuman abilities. This is not the case with Prince Valiant. Based in the Middle Ages, Prince Valiant tells a story of a normal boys transformation into a knight with a family. Val, the titular character, has the ability to perform exceptional feats, but he does so with natural strength, bravery, and sometimes the help of loyal friends.