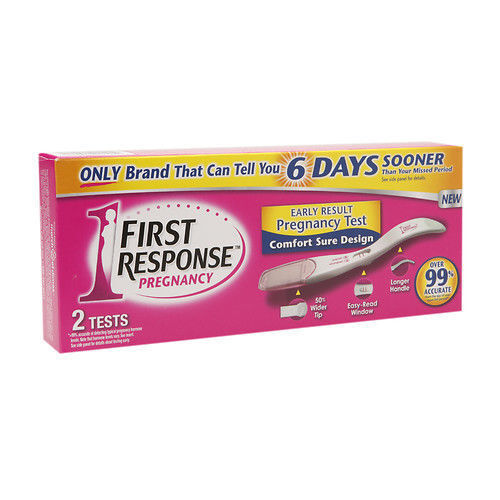 The FIRST RESPONSE brand carries a line of at-home pregnancy tests. There are several options available, such as the Pregnancy Pro Digital Test, which can be used with a menstruation and ovulation tracking app. Another option is the Early Result Test, which is able to detect hCG, the pregnancy hormone, up to six days before the first day of a missed period.

What is an early pregnancy test looking for?

These pregnancy tests offer varying levels of sensitivity, and not all womens menstruation cycles are the same. A cycle can also vary from month to month for the same woman. Ovulation occurs about 14 days after the last day of menstruation, and some womens cycles are 32 days while others are only 28 days. The level of hCG rises as the pregnancy progresses. Consequently, the accuracy of pregnancy detection is dependent on a number of variables. If a woman is pregnant, she is most likely to get a positive result if she tests first thing in the morning after urine has been sitting in her bladder overnight. This is the time of day when hCG will be highest. If she is in the first few days of the first term, she is more likely to get a false negative if she takes the test at another time of day.

How soon can a FIRST RESPONSE test detect pregnancy?

The most sensitive blood and urine tests can detect pregnancy immediately after implantation, which is 6 to 12 days after ovulation. An at-home pregnancy test like FIRST RESPONSE Early Result is similar in that it can identify a pregnancy up to six days before a missed period.

When can you take the FIRST RESPONSE Pregnancy Test?

If you suspect you are pregnant, you can use the FIRST RESPONSE product six days before you expect your next period. The exact day of detection might vary between women. In lab tests, the pregnancy test detected pregnancy hormones in 76 percent of pregnant women at five days before their expected periods and in 96 percent of women at four days before. All dates after that were met with a 99 percent accuracy rate.

How accurate is the FIRST RESPONSE test?

These pregnancy tests offer a a high 99 percent accuracy rate, but they are not absolutely error-proof. This is because the test is detecting tiny differences in hormone levels that are present in urine, so there will be a small margin of error.

Content provided for informational purposes only. eBay is not affiliated with or endorsed by FIRST RESPONSE.