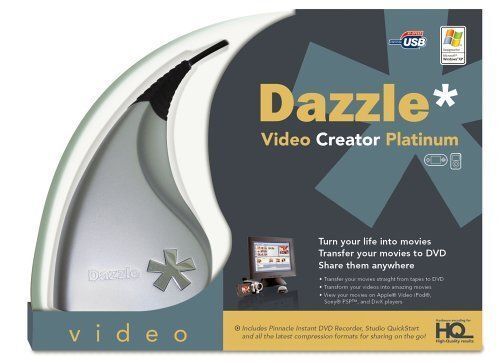 Many people have plenty of old VHS tapes sitting around they would like to convert to digital files. The Dazzle DVD recorder makes that possible. It can also be used to capture video from other analog sources for easy preservation or uploading to a number of sources.

What is a Dazzle capture device used for?

There are many reasons to want to capture analog footage and transform it into digital files. The first is to rescue old VHS tapes. Old tapes wear down over time and important memories and rare recordings can be lost. These devices can capture video footage from old VHS tapes and convert them into digital files or burn them directly onto a DVD. Many Dazzle capture cards can record directly from cameras and camcorders as well.

Another use is to capture gaming footage from certain consoles for the purposes of YouTube videos, Twitch.tv streams, and more. Consoles that do not have an HDMI input such as the Nintendo GameCube and PlayStation 2 need a video converter to capture gameplay footage.

Does the Dazzle come with editing software?

Yes, it comes with the video editing software called Pinnacle Studio for Dazzle. This editing software allows you to add titles, a menu, transitions, and to cut and trim your motion picture to only the parts you want to keep. This allows you to edit out commercials, redundant sections, or simply parts you dont like. Because it takes audio directly from the device, you will not have to worry about wind noise or other background sound ruining the audio.

What are the system requirements for the Dazzle device?

The system requirements to use this device are as follows:

What devices can the Dazzle record footage from and to?

This device features a simple design that has an AV input to plug into analog electronics and a USB 2.0 output for connecting to a computer. It can record from electronics such as VHS players, gaming consoles, Hi8 and V8 cameras, laserdisc players, and more. It can also record from any source with a composite RCA or S-Video output.

It can burn to discs of multiple varieties, including DVD-R, DVD RW, DVD+R, and DVD+RW. It is compatible with exporting to Windows PCs, Apple iPad and iPhone, Android phones, the Xbox, and the Sony PlayStation. Output file formats include QuickTime video, .avi, Flash, DivX Plus HD, and more. It can also export directly to Facebook and YouTube.

Content provided for informational purposes only. eBay is not affiliated with or endorsed by Pinnacle Systems.