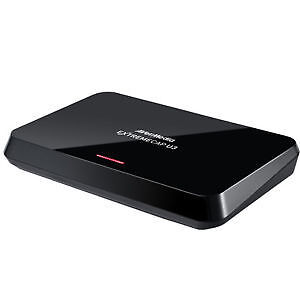 AVerMedia video capture cards provide you with the means of capturing gameplay video in diferent resolutions and details, such as 1080P and 60 FPS or Single Channel HDMI. Devices like the AVerMedia Game Capture HD II are compatible with a range of input connectivity ports, including USB, HDMI, and PCI, allowing you to select the device that fits your computer or console.

What ports are these video capture systems compatible with?

When you are selecting one of these systems, youll have the option of hooking it up via several different ports within your computer or gaming system. USB 2.0 ports are among the more common ways to hook up this card to your device, although many models are compatible with the USB 3.0 version. An HDMI cable is also an option for your HD video via the HDMI input. If youre using a computer, its possible to connect some AVerMedia models up to a PCI port or a PCI Express x1 port, which means that you can place it directly onto the motherboard of your system. Although many models come with the option of one cable over another, some of them provide you with the ability to use both USB and PCI methods, depending on which one you prefer.

How does a video capture device work?

One of the primary reasons to use a capture system like Game Capture HD II with your PC, Xbox One, or PlayStation3 is that it allows you to convert analog video signals into a digital format, such as the ones provided by a video camera or a video game console. Once these recordings have been converted into the digital format, they can then be stored onto your computer storage, wherein they can be used for a variety of purposes, such as streaming video games. When the analog signals are being converted, they are also being compressed into a smaller size that is accommodated by digital.

What are some features of these capture systems?

These capture cards come equipped with a large variety of features that include the ability to capture in 1080-pixel resolution and a one-click button that you can press when you want to start recording to an SD card or hard drive. The headphone or remote control will assist you in recording video and placing it on your computer. Most of these systems, like the Live Gamer Portable, provide you with the ability to choose the resolution at which the video is captured, such as 480i, 480 pixels, 576 pixels, 720 pixels, and 1080 pixels, the last two of which are classified as high-definition. Each specific model comes with its own features, although some features that are present in most systems include the ability to record at up to 60 frames per second and the inclusion of advanced encoders that minimize the amount of stress that your central processing unit goes through when using the device. Most of these capture devices also provide you with a round button that can be pressed when you wish to start recording, which lights up when you are streaming live.

Content provided for informational purposes only. eBay is not affiliated with or endorsed by AVerMedia.